What is the difference between a phonological disorder and an articulation disorder?

As children mature they do not always gain the control to produce speech sounds in a clear concise manner. Actually, along the way of mastering speech production, children often tend to make several mistakes. Depending on their age at which they are still making these mistakes and/or the amount of their mistakes they are making helps determine if it is truly a disorder or not. Each individual speech sound has a different age range as to when the child should make a particular sound correctly.

Phonological Disorder
A common speech sound disorder is a phonological disorder which is a sound pattern problem. A phonological disorder or problem consists of patterns of sound errors involving altering the structure of words and/or substituting speech sounds. This pattern of sounds may be that the child makes all of the sounds that are supposed to be made in the back of the mouth, in the front of the mouth. For example, saying “tup” for “cup” or “do” for “go” involves substituting the /k/ and /g/ sounds in the back of the mouth for sounds in the front of the mouth, /t/ and /d/. This is known as “fronting”. “Cluster reduction” is another speech pattern problem which consists of taking a sound blend such as /gr/, /st/, /bl/, or /fl/ and omitting one of the sounds. Some examples of this are: “green” becomes “geen”, “street” becomes “teet”, “blue” becomes “boo” and “flag” becomes “fag”. Another pattern problem known as “final consonant deletion” involves speech sound errors which occur in a particular pattern, such as having a child leave off all or most of the end sounds of words such as “ba” for “ball” leaving off the /l/, “dah” for “dog” leaving off /g/, and “ki” for “kite” leaving off the /t/.

Articulation Disorder
An articulation disorder or problem is a speech sound problem involving not being able to make or produce individual sounds. An articulation disorder is the substituting(child says: /bish/ for /fish/), distorting (child says: /thpoon/ for /spoon/), omitting (child says: /cool/ for /school/) or adding (child says: /pban/ for /pan/) of sounds. This decreases a child’s speech clarity significantly, making it difficult to understand their speech. Children may have only a few sounds in error or several errors. Every child is different. Those children who have several errors are sometimes unable to be understood at all unless the subject matter which they are talking about is known to their listener. These errors that they do make will be consistently on the same sounds in a variety of words. For example, the /r/ sound may be substituted for /w/ and would then be produced as “wabbit”. The /r/ sound may be in error in the initial, medial, and final positions of words. For example, the word “race” becomes “wace”, “carrot” becomes “cawwot”, and “car” becomes “caw”.

What do I do if I think my child has a phonological or an articulation problem?

If you suspect that your child’s speech has a phonological or articulation disorder a speech-language pathologist (SLP) is a professional that analyzes and evaluates speech and language difficulties. You will want to contact your pediatrician (or your school district) and share your concerns with him or her. The pediatrician (or school district) will provide you with a referral to a speech-language pathologist to evaluate your child’s speech production and communication functioning. Your pediatrician (or school) and the SLP may recommend that you have a hearing evaluation to rule out a hearing loss which may be negatively impacting your child’s ability to perceive sound. The SLP will conduct an evaluation of your child’s speech sound productions, the oral mechanism, and often language development to determine their overall communication abilities.

Depending on the severity of your child’s speech disorder, their ability to effectively communicate their needs, wants, thoughts and ideas may be compromised. School aged children with a speech disorder may have difficulty interacting with their peers and with communicating information to their teachers. Children with these disorders are at an increased risk for later reading, difficulty with spelling and learning disabilities, and they should be treated with speech therapy once they are diagnosed. 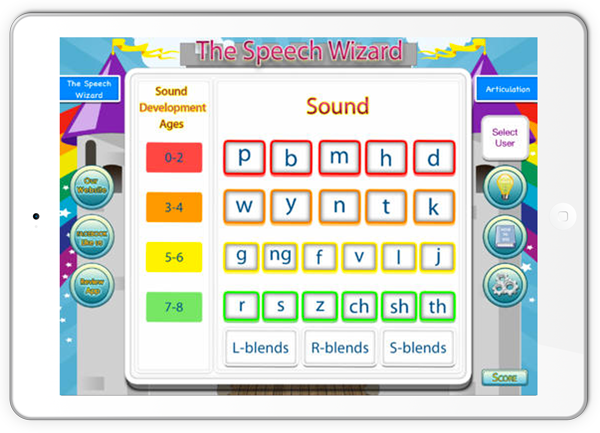 For a more in-depth approach to speech and language therapy, explore The Speech Wizard Apps.